Home » Blog » Getting a pig on the homestead, part 2

Today I’m going to tell you about actually getting the pig in your car and onto your homestead. Just last week I wrote about Getting a Pig on the Homestead: The Emotional Roller Coaster. Well, Y’all, I CAN NOT BELIEVE THAT WAS ONLY LAST WEEK!

Part 2 of getting a pig on the homestead and the emotional roller coaster it is.

I read Jenna’s article “7 Great Tips for the Raising Pigs on the Homestead“. She blogs over at The Flip Flop Barnyard and deserves a whole lot of credit for the things I know! Anyway, I took her advice and named our new piggy “Carnitas” and, already, it has helped me keep in mind that while this is a pet right now, she won’t be in 6 months.

If you’re looking to get a pig, feel free to read my article linked above, but also stop by The Flip Flop Barnyard’s article linked above, also. Her knowledge stretches further than mine on the matter since she’s already raised her first pig. But in the meantime, since I have you here, these are the things I’ve learned so far that you should know.

Transportation when getting a pig

I should’ve filmed this whole show because it probably would’ve gone viral. “Well-Seasoned” homesteaders would’ve been thinking “How did they not think of that?”.

We arrived at the pig-pick-up location in our 2012 Hyundai Elantra Touring (hatchback). We have two 50 lb dogs and were told that the pig was about 40-50 lbs. Read this and keep it in your mind friends, 50 lbs of a pig is not the same as 50 lbs of a dog.

When we arrived, Joe asked us what we planned to put the pig in. We had a tarp laid out in the back and some rope to use as a leash. “We’ll just put a leash on it and get it in the car”. Joe looked at us like we were out of our ever-lovin’ minds! He said, and I quote, “Once you open that back door that pig’s gonna run and you ain’t gettin’ her back”.

Joe is a crabber so he grabbed a large crab trap to put Carnitas in and, you guessed it, she got out before we could even get the trap in the car! The only reason we caught her so quickly was that there were three people so we cornered her. I’m glad Joe was there because I was not prepared to jump on a pig like he did.

So, newbie tip 1: Prepare for transportation. Have a crate to put your pig in and a tarp to put under the crate. I was thankful for that because Carnitas relieved herself in our vehicle.

Fencing after you’re done getting a pig

This is one I can say I was fully prepared for. I had the electric fencing in place and tested it was a voltage tester before we left the house. I’ll admit I felt so horrible because the first thing Carnitas did once we released her was root in the ground and then run into every single part of the electric fencing.

What I want to prepare you for, if you’re a first-time pig owner like me, is that those little piggy squeals are going to break your heart! I wanted to turn off the fence because I couldn’t stand to hear her squeal every time she got shocked but that’s what it’s there for.

She ran into a few times and she hasn’t got near it since. It caused her temporary shock and that was it. She now knows her boundaries so mission accomplished!

Your pig might act depressed. Pigs are social, smart animals and I’m fully aware of that but I’m also aware that my sanity and my wallet couldn’t have survived through 2 pigs for the first time. So, we only got one pig and a lot of people will scoff at me for that.

Carnitas had 2 brothers and a sister back at her first home and her mom was in the lot next to them. Yes, I feel terrible that we took this pig away from her family and put her in a location where she doesn’t have other piggy friends.

I also know that the pigs were being given away because he couldn’t handle them anymore and was already expecting another litter from a second sow.

I’m home all day long at the homestead so I go out 4-5 times at least every day to check on Carnitas. Right now she’s still wary of me but every day she comes a little closer, learning that I’m not going to hurt her but I will feed her yummy foods.

Kathi from Oak Hill Homestead told me to call her by name everytime I feed her so that way if she gets out, she’ll come back if called by name with food in your hand. Jenna from The Flip Flop Barnyard also had advice along those lines so I’m definitely taking it. It’s already working because today she looked upon the first time when I called “Carnitas!”.

Carnitas has three options for shelter. She’s in a lot that’s at least 1000 sq ft, and that’s a lot of space for her right now. I left some tall weeds for her to eat and/or root in. She has yet to enter any of those shelters.

We’ve had some seriously rainy nights here and, instead of going into her roofed shelter, she chooses to lay under the weeds and sleep. It’s cute because the weeds look like a blanket. I was concerned at first, thinking I was already failing as a pig-mother.

The fact of the matter is she has the shelter and she’s choosing not to use it, for whatever reason. One of the shelters is a three-walled shelter with the front totally open and the other two are completely enclosed with a door. If it’s shelter they need and you provide it, it’s shelter they’ll use/find.

Carnitas likes lettuce the least, but that’s not the point of this subject. The first day she wanted nothing to do with me, and I don’t blame her. We pushed her into a crab trap and separated her from all she knew, then released her into this large green lot completely different from the home before.

I offered her swine pellets and corn and she didn’t want it. Finally, I went and got some fresh veggies and that was the starting point. I threw in some frozen bananas and pineapple slices and she loved it! She also really loves cucumbers, but that’s also irrelevant for you.

If your pig is standoffish, offer them fresh veggies. It was a great starting point for me. This morning she got fermented feed, or “slop”, and she seemed to like that even more than the fresh vegetables. I add in swine pellets, BOSS, and corn kernels.

I mentioned this in “Getting a Pig: The Emotional Roller Coaster” and so does Jenna, but be prepared. My largest anxieties didn’t come from Carnitas possibly escaping, it came from Carnitas becoming 200 lbs and me having no plan on butcher day. We have a friend who has agreed to come over and do it/teach us how to do it.

Before I knew that friend I posted in my local Facebook groups. I’m part of some local homesteading groups, local farm groups, and also just simply local re-sale or word-of-mouth groups. You’d be surprised how many people are willing and wanting to teach you to raise and butcher your own meat! I also had multiple people point me to local butcher shops that would do the deed for me.

Be sure to have a plan and do it months in advance. Ask their price and make sure you know if you need to transport the grown pig yourself. Also, discuss HOW they’ll do it. The most humane way possible is the best.

When getting a pig on the homestead, be hopeful

Maybe this is all premature because I’ve not had a pig for even a week yet, but I feel like I’ve learned so much already. Also, Will from The 144 told me there would be good days and bad days, but the good will outweigh the bad. Although it’s an experience I knew would come eventually, but maybe not so soon, I’m so excited to be on this ride. Tell me about your pig-adventures! 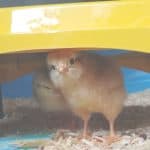 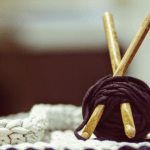 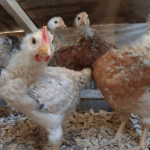